Blog news: I'm thinking about setting up a service to send out new blog post notifications by text message. If you wanted to opt in you would text subscribe to a number and whenever new posts were published you would get a message with the title and the link to the post. You'll ONLY get messages about new posts, I won't sell your number to Jeff Bezos or Mark Zuckerberg, and you'll be able to unsubscribe at any point. If you're interested let me know.

Two weeks ago I walked into an Apple store and returned an iPhone. Similar to my MacBook Pro experience I wanted to try out an iPhone since I had never used one for longer than 5 minutes. I've probably posted about this before but I went straight from a feature phone to a Windows Phone. I never had an iPod (or Zune) so I never really had much screen time with Apple devices until I started working. I truly do respect the iPhone, the original iPhone turned 10 years old on June 29th of this year. It truly revolutionized cellphones. Good touchscreens?! Swiping?! Those things didn't exist in 2007 in such a small package. Now the iPhone has cool technologies such as force touch and fingerprint recognition and it was fun to use them and other iPhone things, like apps, for two weeks.

30 minutes into using it this was my reaction.

The biggest difference to me between an iPhone and a Windows Phone (besides apps) is how you navigate the various UIs. For the first 30 minutes I installed apps and set up settings. It seemed so weird to me that app settings were located with system settings instead of being in the app. It's just different.

After I installed more apps than exist in the Windows store it was a little annoying to find the apps I wanted to use. The main interface of the iPhone is the app layout, which is just a grid of apps. Rearranging them is a little tricky with force touch. Once you're in rearrange mode then it takes much longer than it should to move apps between screens. I also found it silly that I couldn't place apps anywhere in the grid, apps always take up the first available spot in grid. Once I gave up on arranging apps I was a little surprised I couldn't hide the bottom app bar if there were no apps in it. 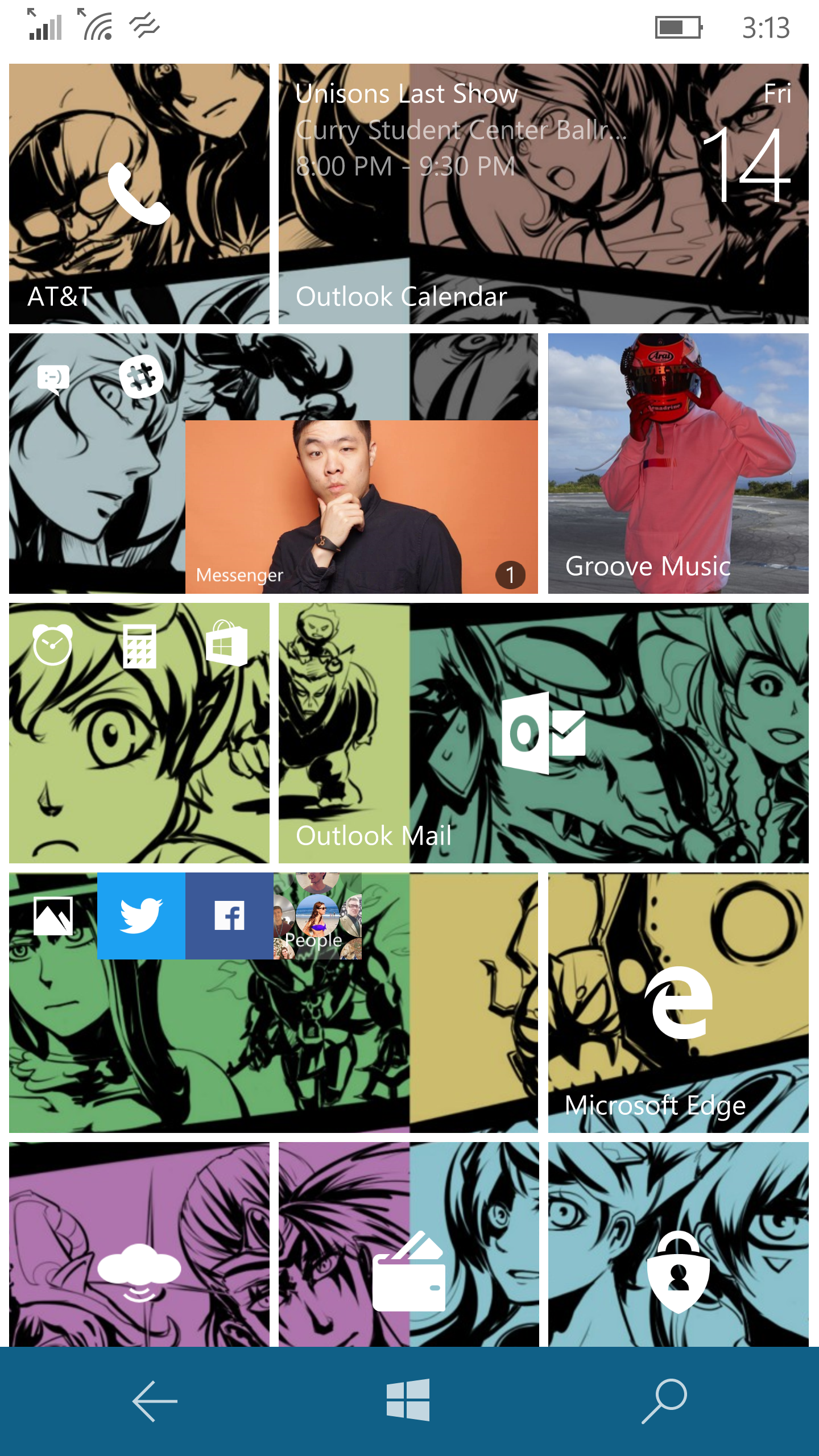 The nice thing about Windows Phone is that many times you don't need to open an app to get information from it, it's right on the live tile. Windows Phone also works with notifications better.

The control center on the iPhone was a little underwhelming. The equivalent on Windows Phone is the action center. Like the iPhone you can toggle your network connections and turn on the flashlight but the iPhone doesn't give you much information about those settings. In the action center on Windows Phone it tells you what wifi network you're connected to, what bluetooth device you're connected to. If you want to change something about that network setting you can long press and it takes you to the settings for that network.

I wouldn't recommend a Windows Phone to anyone. The main reason is apps. When my coworker found out that there were no Google apps on the phone he was shocked. I use my 12 year old Outlook account for email still, no it isn't filled with spam. I use Bing Maps on my phone, no I don't lost in the city. I've found replacements for almost everything I'm missing. Except for Snapchat.

Right now I use a Nexus 5 that my old roommate gave to me just for Snapchat.

Side tangent: Why the fuck is the Snapchat camera on Android so fucking awful. WTF?

Originally the phone was for Airbnb when I first moved to Seattle but now just Snapchat. If I want to snap things to people I need to carry two phones which is kind of silly so I pretty much just use Snapchat when I'm at home on wifi. But for the two weeks I had the iPhone I could snap on the go. It was revolutionary.

After two weeks I was really comfortable with the phone. I found force touch shortcuts that made navigating the phone quicker. I had the phone set up pretty much the way I wanted. I have a couple of Hue light bulbs and being able to turn them on and off from the control center was great. Touch ID was also great. Instead of fingerprint recognition my phone has an iris scanner. However it's pretty much useless if you wear glasses so I never use it. I also had finally gotten used to the keyboard. I didn't really like the default iPhone keyboard so I downloaded the Swiftkey keyboard. Being able to swipe to text is great. I still preferred Windows Phone keyboard but it's nice that you can change your keyboard on iPhone if you want.

And that's why I was fine with returning the phone. After using Windows Phone for almost 7 years now I've become very comfortable with them. I use Microsoft services instead of Google or Apple services, I can reply to text messages on my computer just like with iMessage, most of the apps I want are in the store, I can develop things for my phone easily. It works for me.

The Windows Phone and iPhone experience feel very similar to me. The OS experience is identical across phones, on Android every phone has it's own skin. You can expect you phone to get updates for 2+ years. There is a pretty strong unification between your phone and your computer. Things just generally work. As I said earlier I still like my Windows Phone but there's no new first party phone coming out any time soon and I would like to upgrade sooner rather than later.