Back when I was a Boy Scout I didn't tell anybody that I was a Boy Scout. I was 12 when I first joined. I remember during my entrance meeting my Scoutmaster asked me if I wanted to be a Boy Scout. I said yes. I lied. So every Thursday I would go to Scout meetings and once a month (except during summer vacation) we would go camping. 6 years later I aged out at 18. 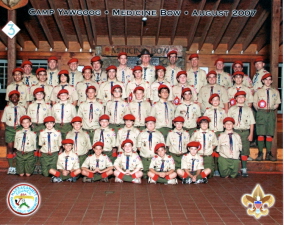 During the summer the troop would go to a Scout reservation for a week. It was like regular summer camp, there was swimming, there were tents, there were dining halls, there was a rifle range and an archery range. Apparently I enjoy and I'm pretty good at shooting stuff.

Fun fact: Part of Moonrise Kingdom was filmed at this Scout reservation and at the state park I worked at during the summer.

One summer at the camp I remember a couple of us left our campsite at some point during the night. We headed up a hill past the dining hall and made our way towards the ranges. During our walk there we were pretty much under dense tree cover the entire time. Then we stepped out into a field. Normally in the city you never really notice a full moon. When I stepped out into the field I noticed for the first time how bright the full moon was. The field was bathed in a cool, pale but bright, blue light. It was pretty amazing. We then made our way down to the pond that was also on the campsite. The lake was completely calm and the moon made a perfect reflection across the surface. The sky was totally empty except for the bright moon that seemed to sit in the center of the sky. It was an incredible view. Now I try to make note of when the moon is full. Living in the city it's sometimes hard to appreciate the beauty of nature and the sky above.

That story is a distant memory at this point. Even though I aged out only 4 years ago, Scouting is a pretty much a blur in my mind. I did learn a few things, like how to make gimp bracelets, but mainly it was just another part of my "childhood". It's crazy to think how something I did for so long was so easily forgotten.

Wednesday was the day the rest of my projects were due. I only have one semester of college left. I've been here for five years and in a little over six months I'll be leaving pretty much everything and everyone I know to find my way in Seattle. After turning in my last assignment I decided to head up to my roof to look out on the city. When I got up there I noticed that the roof seemed much brighter than usual. When I looked up I saw that there was a full moon. The sky almost perfectly clear and the moon just as bright as ever. Will my time here become another distant memory?