If you want a TL;DR skip to the end for the election predictions, the section is called 2021 General Election Predictions.

Seattle elections are the first local elections I've ever paid attention to. In college, probably like most people, I did not really pay attention to local elections. I never even registered at my college. I kept my registration in my home state and just went home to vote in the presidential elections. Once I moved to Seattle I wanted to change that and pay more attention to local politics. I've only lived in Seattle for 4 years at this point but I can definitely say Seattle elections behave differently than national elections due to how the city, county, and state run elections and due to the Seattle electorate. I really got into looking at local election data right after the 2019 city council elections. At least one ballot box location, the Seattle Central College box, filled up multiple times on election day and because of how King County counts ballots, ballots submitted earlier get counted first, Kshama Sawant and Andrew Lewis won their elections while being behind in the Tuesday and Wednesday ballot counts. Looking at the detailed precinct level data showed that at least for Sawant's win she won the extremely dense and therefore influential west side of Capitol Hill. This year with the 2021 citywide elections I wanted to dive deeper into the data to try and figure out what areas of the city could be as influential to mayoral elections and along the way I attempted to predict the winners of 2021 general election in November.

A Crash Course in Seattle Elections

Let me give a quick introduction to Seattle elections. All elections in Washington, except for presidential elections are run as a top-two primary. In this style of election all candidates, Democratic and Republican, are on the same primary ballot and all compete for the top two spots. This can lead to both candidates in the general being from one party. Other strange outcomes can occur as vote splitting can happen. The linked Wikipedia article gives more detail. Seattle city elections have the added benefit of being non-partisan, candidate's parties are not listed on the ballot. Washington is also a vote by mail state and has been statewide since 2011. Seattle's elections are handled by King County and voters can return ballots via mailbox, election drop box, or at a vote center. Election day is really election fortnight as ballots are mailed out about three weeks before election day giving voters about two full weeks to vote and submit their ballot. Seattle has 25 drop boxes throughout the city that are emptied daily during election fortnight. Ballots are counted as they come in but initial results are not released until 8 PM on election day. Unlike in other places, King County Elections only releases results once a day. After the 8 PM election day drop, results are not updated until 4 PM the next day and results are continually updated, once a day at 4 PM, until all results have been counted. The election is certified two weeks after election day.

This quirk, election officials working normal hours and only updating results once a day, can result in come from behind narratives. Seattle is a progressive city and even though city elections are non-partisan everyone in city government is a Democrat*. Liberal, progressive, left-leaning, and moderate mean different things locally versus nationally but general elections are typically between a progressive/left-leaning candidate and a moderate candidate. Generally speaking, older people in the city tend to vote early and vote for moderate candidates and younger people in the city tend to vote late, right up to 8 PM, and vote for progressive/left-leaning candidates. This causes a moderate to strong left shift in the election results as the Thursday, Friday, and Monday results are released compounding on the come from behind narrative. This happened in 2019 and it happened again in the 2021 primary election.

There are three major factors that I think go into a candidate's vote total in the general election.

Where Existing Votes Will Go

Candidates typically fall somewhere along a progressive to moderate line and once a candidate is eliminated from the primary I figure that people who voted for that candidate will proceed to vote for the candidate in the general that is most ideologically similar to their primary election candidate. The top two candidates in the mayors race are Bruce Harrell, a moderate, and Lorena González, a progressive. People who voted for Art Langlie, described on his campaign website as a centrist, are probably very likely to vote for Harrell in the general and people who voted for Andrew Grant Houston, the only mayoral candidate who wanted to defund the police department by 50% are very likely to vote for González in the general. I translated this to three different levels of vote swing. Strong with 70%-100% of voters voting for the target candidate, moderate with 55%-70%, and tossup with 45%-55%.

I then assigned this vote swing to every eliminated candidate that I knew enough about. Candidates not listed have a vote swing of tossup.

You may note that tossups do not have a target assigned to them, this is because the target is determined by how strongly a neighborhood voted for either of the top two candidates, I call this the neighborhood lean.

King County publishes detailed election data at a precinct level. This is useful data but since there are 1,020 precincts in Seattle currently it is hard to communicate election data on a level most people can easily understand. People in Seattle are much more familiar with Seattle's neighborhoods so I spent a few hours assigning every precinct in Seattle to a neighborhood resulting in this map. 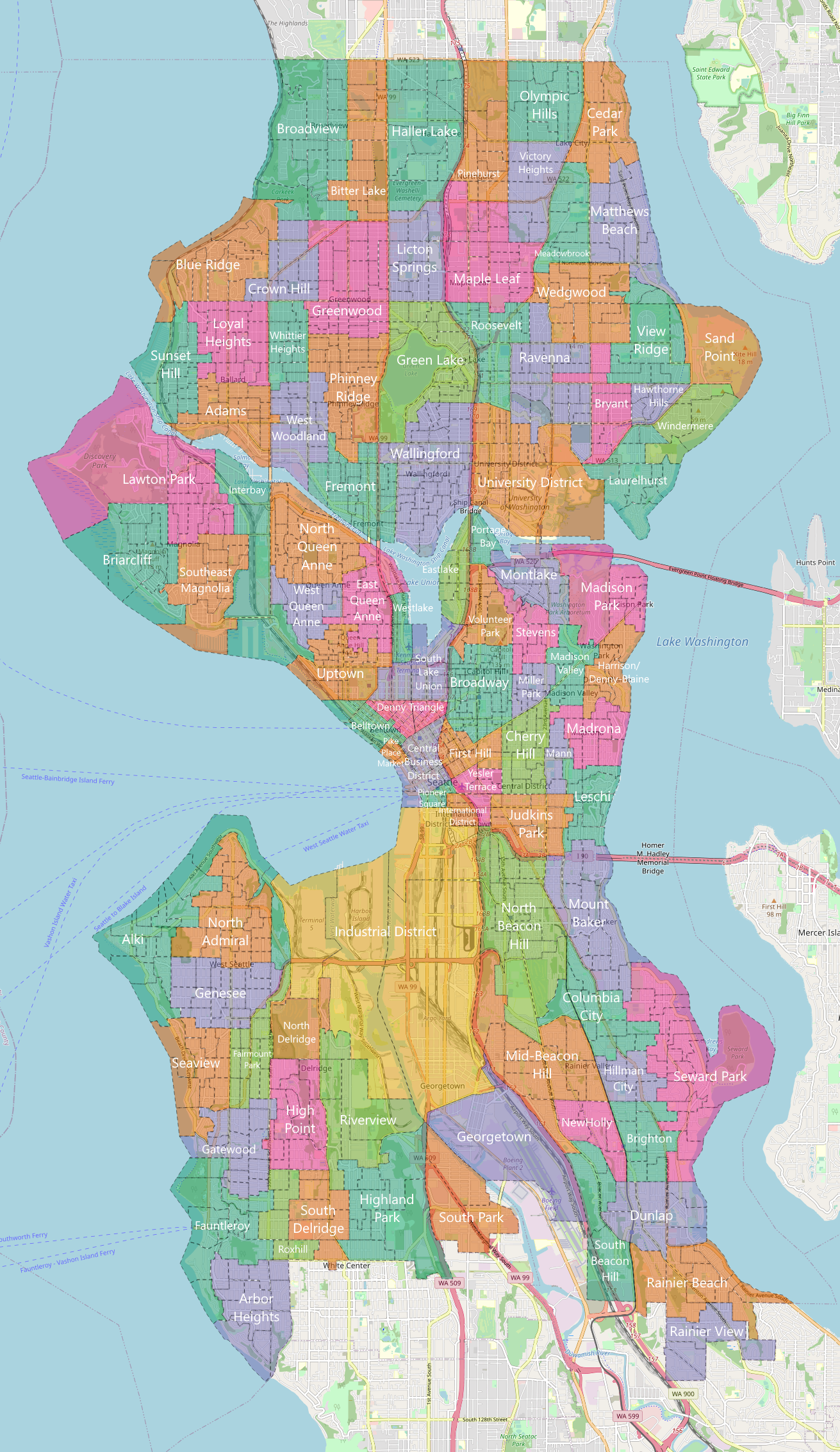 Where New Votes Will Go

To actually predict the election I ran 40,000 simulations to see who wins most often. During a simulation a random value is picked between each range as described above. I'll summarize them again.

Here are the predicted results

Here is a table of the error between the two

And here's a table of the vote swing targets I chose 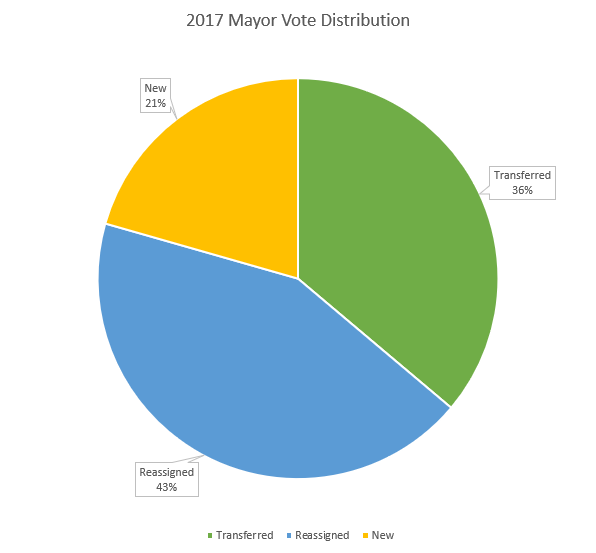 Since the model runs many simulations the chance of a candidate winning can also be expressed. Over 40,000 simulations Durkan won every single one giving her a 100% chance of winning the election. Since Durkan actually won the election in 2017 this must mean my model is 100% correct.

Neighborhoods With the Most Registered Voters

Neighborhoods With the Least Registered Voters

Neighborhoods With the Most Votes

Neighborhoods With the Least Votes 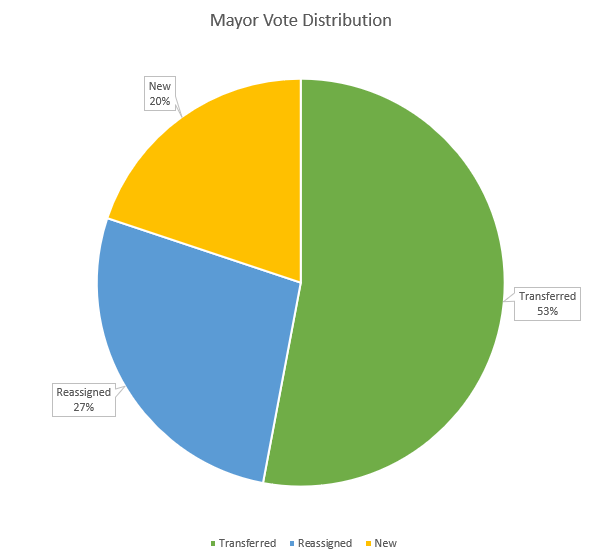 Neighborhoods With the Highest Vote Percentage for Bruce Harrell

Neighborhoods With the Highest Vote Percentage for Lorena González 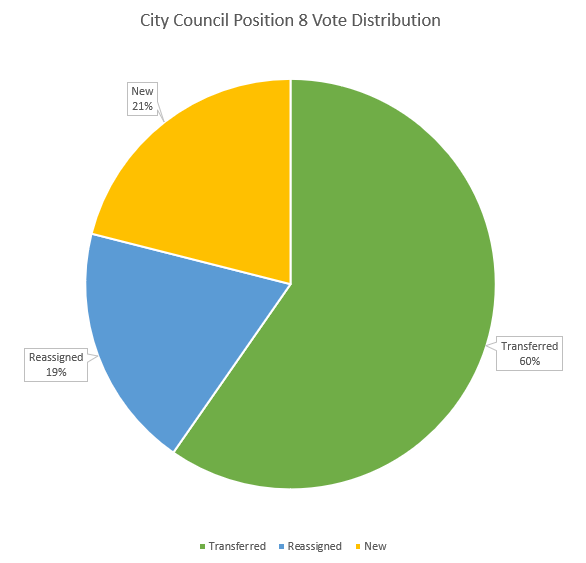 Neighborhoods With the Highest Vote Percentage for Teresa Mosqueda

Neighborhoods With the Highest Vote Percentage for Kenneth Wilson 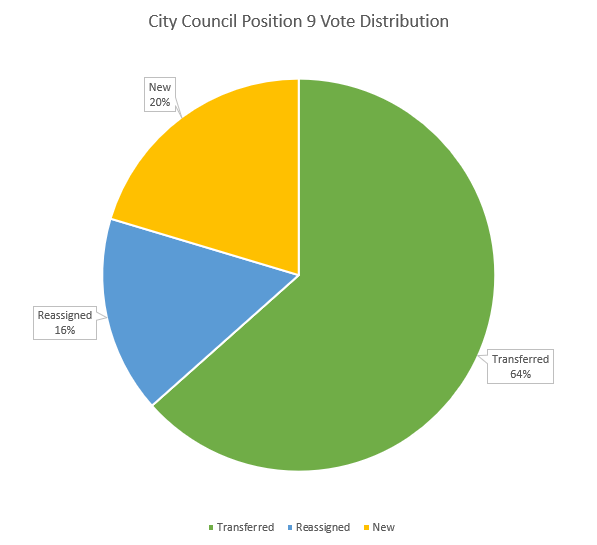 Neighborhoods With the Highest Vote Percentage for Nikkita Oliver

Neighborhoods With the Highest Vote Percentage for Sara Nelson 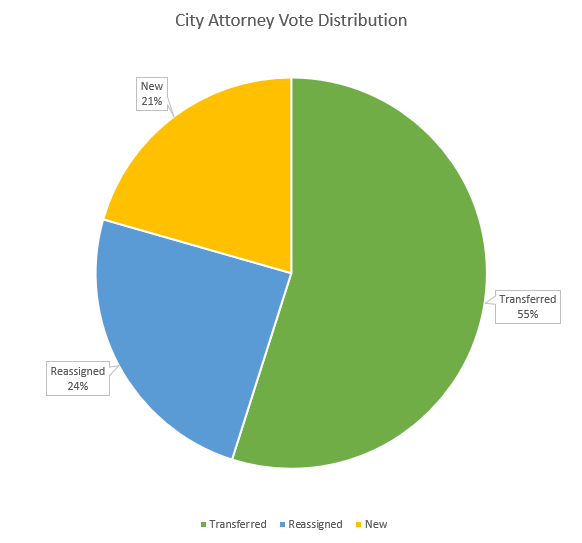 Neighborhoods With the Highest Vote Percentage for Nicole Thomas-Kennedy

Neighborhoods With the Highest Vote Percentage for Ann Davison

Now for the moment you've been waiting for, the 2021 general election predictions. If you want to view the results by neighborhood on a map you can explore the data here. In the dropdowns select 2021 / Estimated and then select a race.

On January 6, 2021, a mob of rioters supporting United States President Donald Trump stormed the United States Capitol, breaching security and occupying parts of the building for several hours. The riots were incited by comments made by Trump at an earlier rally. The storming disrupted a joint session of